Glycerin is a Badass Queen. Here’s Why According to Science!

Hi there, friends! I hope you are doing well 🙂

While we’re all patiently waiting for the launch of Malezia (thank you for your patience), I thought it would be a good idea to quickly come on here and answer a question I get asked about EVERY. SINGLE. DAY.

Is Glycerin Safe for Fungal Acne?

The answer is yes. And I will be explaining all the reasons you should be using it down below!

But first, how do we know it’s not a problem?

Because glycerin is not a fat source and Malassezia is a lipophilic fungus and fatty acid auxotroph. Auxotrophic meaning there is a mutation in one of its genes that prevents it from synthesizing compounds essential for its survival. In this case, those are fatty acids of certain chain lengths which is why it searches for them in the environment. Without them, it cannot live.

Explained more simply, it’s like a person who doesn’t know how to cook for themselves and relies on Mcdonald’s drive-thru to stay alive. If the zombie apocalypse were to hit tomorrow, you better believe that person is f*cked.

In this scenario, your sebum and fat-containing skincare products are Mcdonalds. Malezia is the apocalypse.

You might be thinking to yourself, “well if Malassezia requires exogenous fats to survive, and glycerin isn’t a fat source, then why does everyone think glycerin is a problem?”

Great question! The answer to that is because I’m an idiot.

The Conspiracy Against Glycerin: Why Everyone Thinks It’s Growth Promoting.

Perhaps you’ve noticed that Sezia.co flags glycerin as a “high sensitivity” ingredient. That would be my fault. 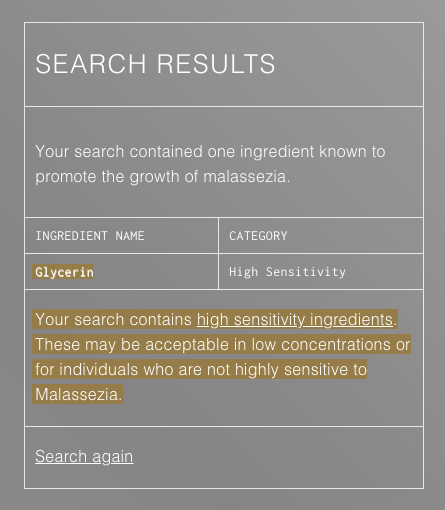 For those that don’t know, Sezia was based on the original research shared on Simple Skincare Science several years ago. At the time, the only research I could find on glycerin was a single paper whose abstract stated it could promote the growth of malassezia.

I didn’t have access to the full study back then because it’s from China, but prematurely warned everyone on the fungal acne guide to avoid glycerin anyway. That unfortunately snowballed out of control, and now everyone thinks glycerin is the black plague. Sigh. 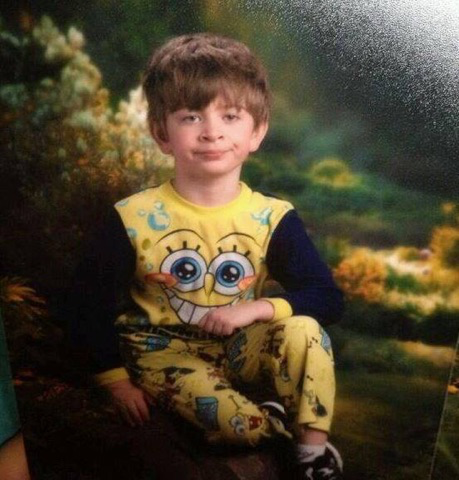 Fast forward to today, I have read that paper in its entirety thanks to one of our readers (Hailey) who translated it for me and sent it via email. Ironically enough, there was an error in the original translation and the paper actually states:

“Glycerol cannot promote the growth of Malassezia, therefore cannot be used as a susceptibility test… [whereas] the influence of lipids on antifungal activity of drugs must be fully considered.”

In other words, the researchers were examining whether pairing certain ingredients with antifungal drugs reduces their efficacy against malassezia. They found that using fats such as oils and polysorbates makes them less effective. However, the same did not apply to glycerin.

This of course makes sense considering several other sources have had similar findings. For example, Caprilli et al found glycerin does not influence the growth of pityrosporum orbicuIare in culture testing. (2)

Note: pityrosporum is the former name of malassezia.

Similarly, in a research letter Benaim-Pinto wrote how he healed seborrheic dermatitis (SD) in 18 patients by cleansing with pure glycerin. (4)

Note: both studies above are relevant because malassezia has been implicated in the pathology of dandruff and SD.

And if that wasn’t enough evidence, our super awesome microbiologist and cosmetic chemist has verified glycerin is safe through her own independent testing! 🙂

Why Glycerin Is Amazing for Skin. 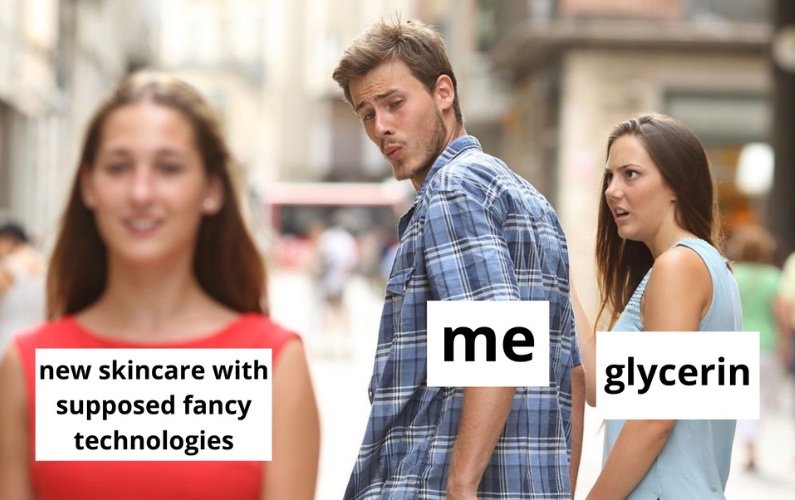 Still skeptical? Perhaps you’ve tried glycerin and are convinced it broke you out. If that’s the case, sorry for the breakouts :’(

However, maybe I can convince you to try it out in our urea moisturizer! 🙂 Why would you do such a thing? Because if tolerated glycerin is actually an amazing ingredient with a ton of skin benefits.

For example, did you know that glycerin was the only humectant that was able to restore stratum corneum hydration in AQP3-deficient mice? (6) This may be particularly important for those with dry skin considering AQP3 is a protein that helps facilitate barrier recovery and improve skin elasticity. (7) The other tested molecules that had minimal to no effect included erythritol, xylitol, propanediol, and even urea!

This may be surprising to some considering how much I rave about urea, but it’s not the first time I’ve seen a study with these results. For example, Bettinger et al found that only a moisturizer with 10% glycerin was able to improve skin hydration. The same emulsion made with 10% urea or 10% propylene glycol performed no better than a moisturizer without humectants. (8)

This isn’t to say urea sucks (it absolutely does not – how it’s formulated dictates its performance) but you get the most bang for your buck combining the two. In fact, several studies have demonstrated that urea and glycerin have a synergistic effect, and work better together than either used alone. (9, 10, 11)

One study even showed that combining urea and glycerin has a smoothing effect on the skin! (12)

Fun fact: and now you know why I incorporated glycerin into the urea moisturizer 😉

Other amazing things glycerin does:

And much more! If you want to read a great academic paper that summarizes all things glycerin – check out this PDF.

Welp, that summarizes it for this blog post folks! I hope you’ve enjoyed it and have reconsidered giving glycerin a shot…. At least for our urea moisturizer that will be out in a couple months 😉

Is your skincare line still coming out in 2020?

Glycerin irritates my skin if a main ingredient.

Yes, I’ve noticed that a glycerin containing product is way more humectant than the ones that doesn’t. In fact, sometimes I’m able to skip moisturizer when using a serum with glycerin, but no waaaay I could do it if a serum is glycerol free.

Awesome post!! Immediately dropped what I was doing to read it. (I’m a terrible employee lol) Do you think that a few drops of pure glycerin could be added to a moisturizer before applying? I do this with MCT oil already, but wondering if the same concept applies to glycerin.

I’m an old girl and I’ve been through the wringer with my skin since puberty. I took tetracycline for decades and tried various Rx and OTC topical creams to keep my skin dry. When I was in my late 30s I developed cystic acne so my dermatologist prescribed Accutane and voila, no more acne but very dry skin. However, she also told me to never moisturise to avoid plugging my pores. Now, I have a face full of wrinkles and old acne scars (which look worse as you age because your skin gets drier).

Skin care has come a long way since then. I always moisturise and I have started using tretinoin cream again for plugged pores on my nose and with a faint hope that it might help my wrinkles but while it helps with pores and texture, I have not seen any improvement in my wrinkles. I am completely disillusioned with products developed by cosmetic companies so I just don’t buy them anymore. Short of cosmetic surgery there is nothing available over the counter or even by Rx, for wrinkles and acne scars.

I’m getting to the point which is that I decided to do my own experimenting with various oils and urea, which I picked up on from this blog. Personally, I haven’t seen any improvement in my skin from using urea, so far. I’ve used urea 10% but I can get a 20% concentration, which I will try next. I also decided that I would satisfied if I could improve the just the appearance of my skin with a combination of makeup, to hide the damage, and a moisturiser or benign oil. So I bought a bunch of oils and one of them was glycerin which I wouldn’t even have looked at sideways when I was young. I am pretty impressed with the ability of this oil to make my skin look better *especially if I spray it on after I have put foundation on my face*. My skin looks dry even with a moisturiser and foundation on top (although Vaseline helps). But when I spray a 50/50 mixture of glycerine and water on my face on top of foundation, the glycerine softens the edges of wrinkles/scars and makes my skin glow. It doesn’t last all day but most of the time that’s fine. It also looks a bit oily, but I’m OK with that to

Just my two bits about glycerine and how it has helped me.

Now i get it 😂 i always get confused when some dermatologists said tht glycerin is fine but after i checked in sezia.co it classified as high sensitivity 😂Thanks for this! 👍🏼

What should we look for in a product with Urea (obviously waiting for yours, but in the mean time)?? I tried the hada labo gel moisturizer but I had burning sensation after 4 consecutive days of using it… how do we know its properly formulated?